Bolivia, NC – The newest member of Brunswick Community College Board of Trustees was sworn in Thursday, August 18th at the regularly scheduled monthly meeting.

Representative Frank Iler administered the Oath of Office to new Trustee Michael Norton. The Brunswick County Board of Commissioners appointed Mr. Norton for a four-year term. His wife, Connie, and son, Abram, accompanied him during the oath.

Norton, a lifelong resident of Brunswick County, attended North Carolina State University, where he earned an undergraduate degree in Mechanical Engineering.   He later supplemented his education by earning a Master of Business Administration degree through coursework at East Carolina University.

Michael brings to the Board of Trustees a broad range of career experiences. His current occupations are with Compass Pointe Engineering and SOLitude Lake Management, both of Shallotte. In prior years, Michael served in a number of professional capacities, gaining experiences in work with NASA in Texas, and GE Nuclear in North Carolina.   His career in the electric utility industry offered work in engineering, environmental, and management roles with Carolina Power & Light Company (Progress Energy) for more than a decade. 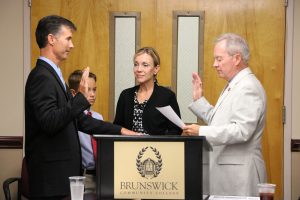 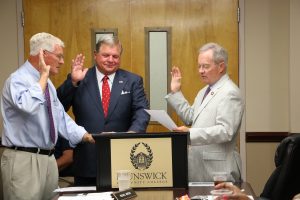