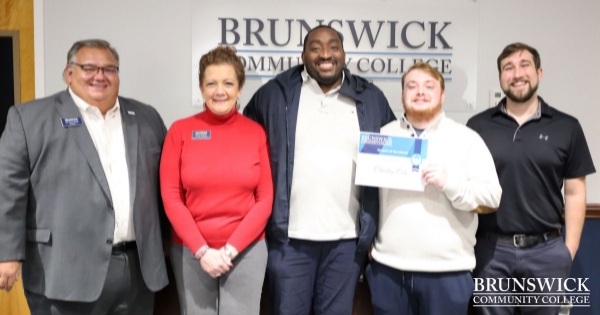 Little did Christian Cole know that a conversation with a customer he helped at work would lead to a second chance at a college education – and his selection as BCC Student of the Month for November 2021. “I know excellence when I see it, and Christian was the real deal,” said Cindy Sterling, executive assistant to the President of BCC. “His customer service skills were impressive. One of his co-workers, who later became a BCC student and employee, mentioned that Christian was stepping down from his role as customer service manager to return to BCC.”

From that day on, Sterling became his greatest champion. She says she’s proud of the progress he has made. Together with Christian’s advisor, Marcus Faison, and former co-worker Tyler Horvath, Sterling nominated him for Student of the Month.

Christian currently has As in both of his classes. In addition to attending school, he cares for his grandmother and says he’s sticking with it this time.  Christian recently secured a position as a work-study student. BCC President, Gene Smith, says he remembers the first day Christian returned to BCC. “He was wonderful, and I could not be happier that BCC is playing a role in his educational journey,” said President Smith.”  I’m proud to honor him as Student of the Month.” Congratulations, Christian!  We are so glad you’re here.