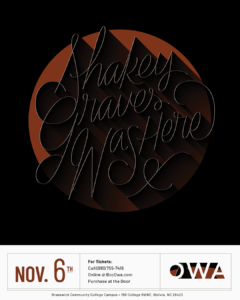 Shakey Graves is the stage and performing name of Alejandro Rose-Garcia, an American folk-rock singer, songwriter from Austin, Texas, U.S.

Rose-Garcia is an independent artist through and through. Thanks to the donations of fans and the modest homegrown talent, the singer/songwriter has been able to record and release and number of albums and EPs. These included “Roll the Bones” in 2011, a folk album with a tender and teasing playfulness to it and the eight-track Donor Blues EP, a very lo-fi recording with a big heart.

In preparation for a 2013 Halloween show in Colorado, U.S., Rose-Garcia with friend and fellow musician Esme Patterson of Paper Bird, spent a few hours in Patterson’s house writing a song. Wearing bold Halloween costumes, the pair took the newly created sheet music on stage and received a unexpected whirlwind of a reaction, for the weave-like texture of the male and female vocals. The song was called “Dearly Departed” and has since only expanded on that success, with over four-million plays on Spotify and a performance on late night TV show ‘Conan’.

The single “Dearly Departed” featured on Shakey Graves’ 2014 album “And The War Came” which many of the songs also adopt a similar male and female vocal arrangement. Since the release the pair have played too sold out audiences in Portland, Oregon, New York, San Francisco, California and Chicago, U.S. with increasingly bigger shows and festival slots.